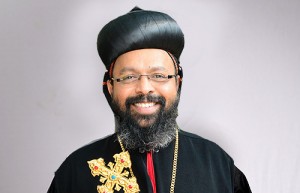 His Grace was born  as the son of E.K. Kuriakose and Sossama Kuriakose. His Grace is a member of St. George Valiyapally, Chungathara , Malabar Diocese.  After taking his Bachelors Degree in Science from      Malabar Christian College, Calicut, he joined the  Orthodox Theological Seminary, Kottayam, for theological studies. From the Orthodox Theological Seminary, Kottayam, he took Graduate Degree in Sacred Theology (GST) and the Bachelor of Divinity (BD) degree at the Senate of Serampore University. After taking his M. Th from  Dharmaram Theological College, Bangalore,  he took  D.Th  from Sathri, Banglore  under  Serampore University.
His Grace took several key positions of the church as Prof. OTS Ktm , Registrar, Orthodox Seminary, Principal Secretary to H.H Didymos I Catholicos , Cheif Editor,Malankara Sabha Magazine,  Member Ecumenical Relations Committee, Seminary Governing Board , Bible Society (kerala auxilary)His Grace’s major area of study is based on major religions .
In addition to the responsibilities of the diocese His grace is working as the professor, Orthodox Theological seminary, President, Malankara Sabha Magazine.His Grace is a Good singer and writer.

He is elected as the  Metropolitan candidate on   17th February at the Malankara Association held at Sasthamkotta. He is consecrated as Metropolitan on  12th May 2010 at Mar Elia Cathedral, Kottayam.His Grace  is serving the Adoor – Kadampanad Diocese as its Metropolitan.