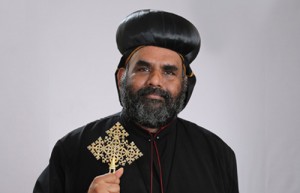 His Grace was born on August 13, 1959 in the famous Poothiyottu family at Mepral. His boyhood name was Cheriyachen. He has three brothers and one sister.

He studies in different schools in Kerala until he finished his High school. The first two years of his college education was in Malabar Christian College. He received his BA (English) from the St. Joseph College, Devagiri (Calicut University). He continued his studies in Theology at United Theological College, Bangalore and received a Bachelors of Divinity and a Masters of Theology.

His Grace Kuriakose Mar Coorilose ordained him Deacon on January 4th, 1986 and priest on May 16, 1990 at his home parish St. John’s Church, Mepral. His Beatitude Mar Baselios Paulose II professed him as Ramban on August 5, 1993 at Moovattupuzha. His Holiness Moran Mar Ignatius Zakka Iwas I, Patriarch of the Syriac Orthodox Church of Antioch, consecrated him as Metropolitan on August 15, 1993.